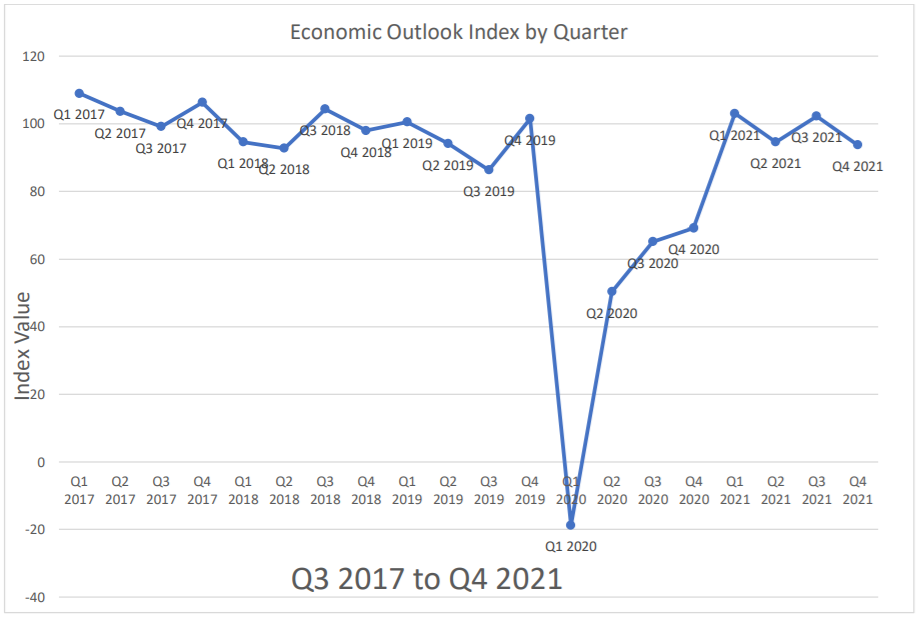 The fourth quarter 2021 CEO Economic Outlook survey finds that the Index remains near pre-COVID level and that most employers are feeling the impact of the Omicron surge. Additionally, CEOs expect sales and employment to increase over next 6 months with capital spending nearly flat.

“The survey results suggest that CEOs continue to be optimistic about the next six months, particularly with respect to predicted sales and employment. The overall index has returned to the levels just slightly below that experienced for several quarters pre-COVID,” said Rich Boulger, associate dean at the Robins School, who administers the survey and collects the responses. “Specifically, the index is currently 93.7 versus the average of 99.2 in the 13 quarters prior to Q1 2020.”

“I’ve heard from many CEOs that the Omicron surge is making it difficult to keep staffing levels up to normal. That seems to be the primary reason for the 8-point drop in the index” said Scot McRoberts, executive director of VACEOs. “COVID aside, these small business CEOs are seeing growth and opportunity in the next six months.”

Most CEOS have experienced at least a minor impact from the Omicron variant on their business. That’s the latest from the quarterly CEO Economic Outlook Survey conducted by the University of Richmond’s Robins School of Business and the Virginia Council of CEOs.

Eight-four percent of CEOS reported a minor impact from Omicron. Nearly 60% of CEOs expect sales to increase and just over 60% expect employment to increase over the next six months.

The survey found expectations over the next six months for sales and employment are positive although those expecting growth in sales were down slightly compared with the end of Q3 2021.Expectations with regard to capital spending were primarily flat.

More than half (59%) of CEOs indicated that they expect sales to increase over the next six months.

Taken as a whole, the results pertaining to sales, capital spending, and employment continue to be positive although the overall Economic Outlook Index decreased (93.7 versus 102.2) relative to the results from the end of Q3 2021.

WILL EMPLOYEES BE REQUIRED TO RETURN TO WORK?

The survey also asked CEOs how the current COVID-19 surge related to the Omicron variant impacted their business. Their response was as follows:

Employers indicated that the impact was largely due to employee absenteeism and related costs.

Additionally, CEOs were asked what percentage of your workforce will be working remotely relative to pre-COVID.  Their response was as follows:

The following survey results show projections for the next six months for sales, capital spending, and employment.

About the Economic Survey

About Virginia Council of CEOs (VACEOs)

Virginia Council of CEOs (VACEOs) is a nonprofit organization connecting CEOs for learning and growth. Formed more than 20 years ago, member benefits include placement in a peer roundtable group and access to a thought leader network, and a robust program of events for learning and growth. This is not a networking group, but rather a group of CEO peers who are invested in the success of each member. To qualify for membership CEOs must run a business with $1M+ revenue and 5+FTEs. Learn more at www.vaceos.org.

About Robins School of Business

The Robins School of Business is the only fully-accredited, highly-ranked undergraduate business school that also is part of a highly-ranked liberal arts university. U.S. News ranks the Robins School’s MBA program #2 in Virginia. The school’s executive education division offers customized training and consulting to a wide variety of businesses.
﻿