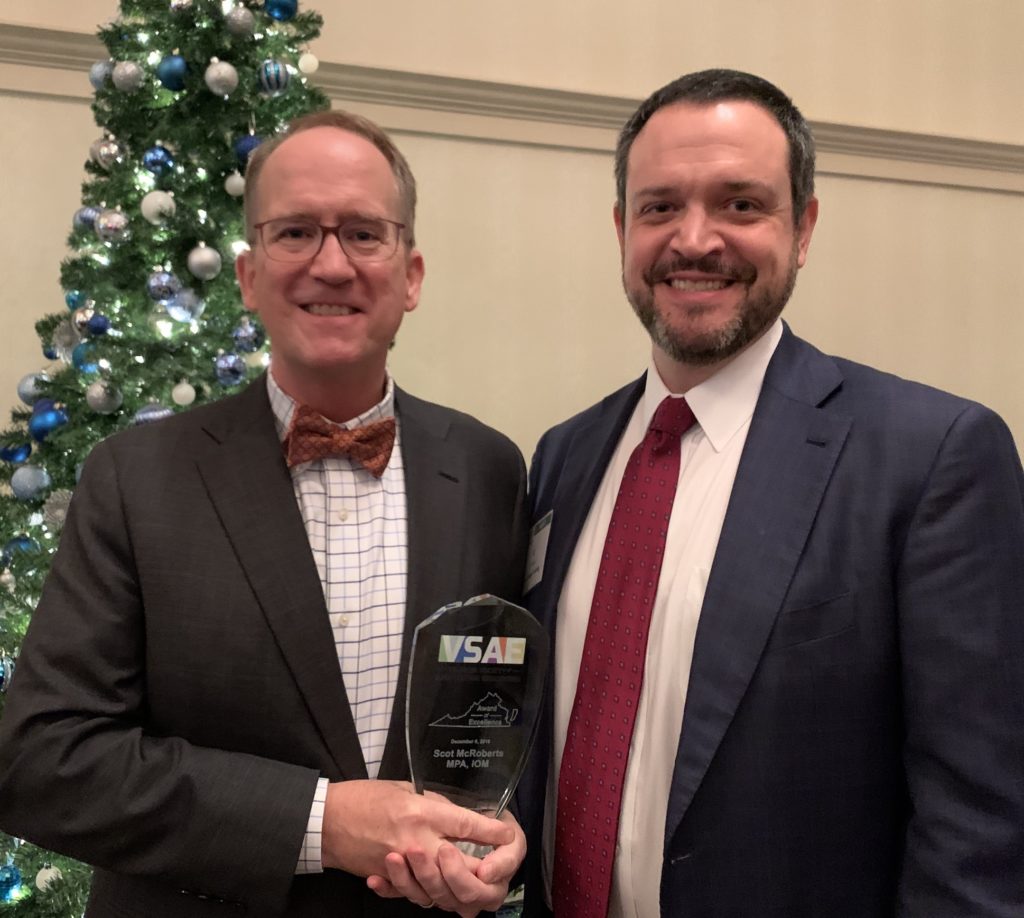 Richmond, Virginia: The Virginia Council of CEOs (VACEOs), a nonprofit association serving more than 200 small and mid-sized business owners, announced today that its executive director, Scot McRoberts, has been awarded the 2019 CEO Award of Excellence Award as presented by the Virginia Society of Association Executives (VSAE).

McRoberts was honored on Friday, December 6, 2019, for his leadership and dedication to VSAE at the organization’s annual awards and silent auction event held at the Hilton Richmond Hotel & Spa in Short Pump, Virginia.

The CEO Award of Excellence is the highest award VSAE bestows upon one of its executive members. This award is given to an outstanding chief staff executive who has been nominated by peers in recognition of his or her leadership and achievement.

“So much of what VSAE is today is because of Scot and his leadership during his tenure on the board,” wrote one VSAE member. Others stating: “He was instrumental in launching VSAE’s CEO & Senior Staff Retreat and continued to provide leadership each year on format and content for the event. Scot also led the task force charged with overseeing VSAE’s rebranding in 2015, and has been one of the key drivers of VSAE’s popular Shared Interest Group (SIG) program. He is always willing to volunteer, and continually provides counsel and makes connections for other members.”

It was the peer experience McRoberts received during those formative years at VSAE that helped him to build his own organization, the VA Council of CEOs. Next year the Council will celebrate its 20th anniversary.

“Almost twenty years ago I left a good job and 401K to work –  alone – in my home office – for very little money, ” said McRoberts during his acceptance speech. “One of the first things I did was join VSAE. I knew that I needed to surround myself with other association professionals and continually learn our craft. Well, I have had some success at creating a new association that makes a difference in peoples’ lives, and along the way created a few more jobs for other association pros who are with me today. I simply couldn’t have done it without VSAE. I am truly honored to receive this award.”

About the Virginia Society of Association Executives
Formed in 1949, VSAE is a 400-plus member association consisting of association executives, association management companies, and others who serve the association industry with products or services. VSAE’s vision is to be the best at making associations the best by providing opportunities for association professionals to connect, learn, and lead.Learn more at https://www.vsae.org/.

About the Virginia Council of CEOs
The Virginia Council of CEOs is a nonprofit association that serves the CEOs of small and mid-sized businesses in Virginia. The Council was founded in 2000 to connect CEOs so that they can learn and grow together. Made up of more than 200 members from the Richmond and Charlottesville regions, the Council is poised for continued growth. Learn more at https://www.vaceos.org/.