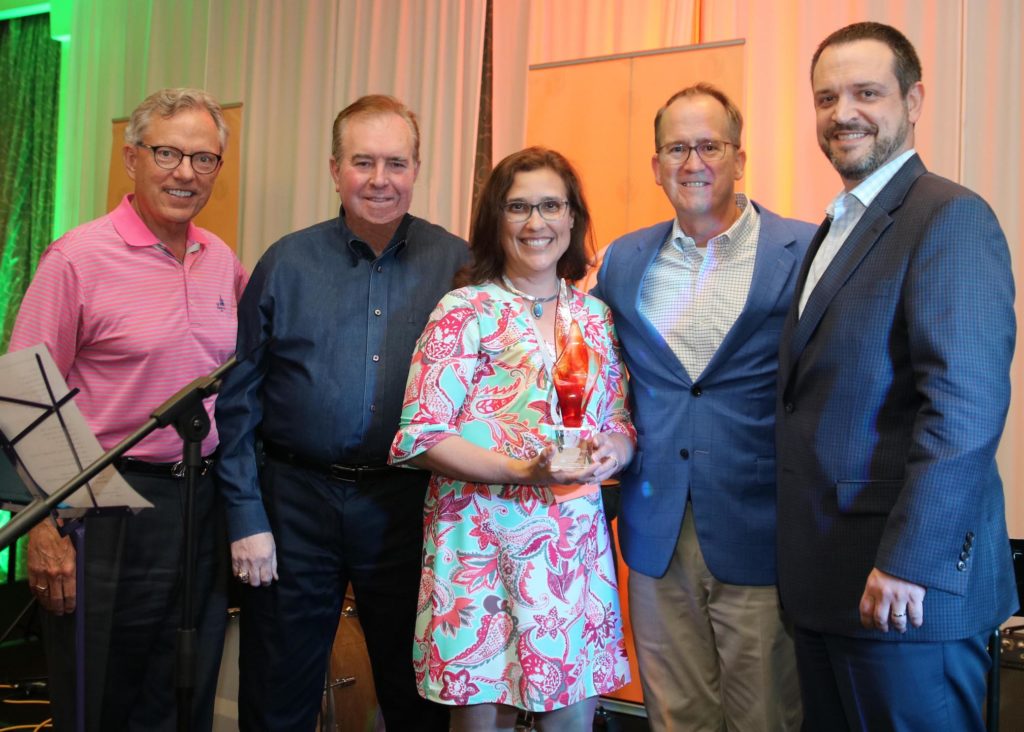 May 6, 2019, Richmond, Virginia: The Virginia Council of CEOs (VACEOs), a non-profit association serving more than 240 small and mid-sized business owners, announced today that Arlene Lee, President of R.E. Lee Companies has been awarded the Charles E. McCabe Leadership Award. Lee was honored on Thursday, May 2, 2019, for her leadership and dedicated effort to grow the Charlottesville membership base at the 15th Annual VACEOs Retreat held at the Kingsmill Resort in Williamsburg, Virginia.

The Charles E. McCabe Leadership Award, presented by the Virginia Council of CEOs Board of Directors, recognizes VACEOs members who make significant leadership contributions to the Council. Chuck McCabe, CEO of Peoples Tax and The Income Tax School, was appropriately named as the first recipient of the award during the 2017 VACEOs Retreat. David R. Barrett, President and CEO of Barrett Capital Management, LLC, became the second recipient.

Arlene Lee has been an active member of the Council since 2016. She currently serves as a Forum Leader and is an active Advisory Board member. Frequently making trips to VACEOs events in Richmond from her home base in Charlottesville, she is a valued ambassador and connector between the Council and the Charlottesville market membership base. Lee tirelessly connected the Council leadership with influencers and attended nearly every one of 25 events held in Charlottesville over the last two years.

“When we began our expansion in Charlottesville, this member led the way,” said JJ White  — current VACEOs Chair and Dale Carnegie Training Franchise Owner — during the award presentation.

“She made such a difference because she simply shares her experience of being a newer CEO, and the many ways that the Council and her Forum have helped her learn and grow as a leader,” said Scot McRoberts, Executive Director, Virginia Council of CEOs. Adding, “The impact of Arlene’s leadership on our growth in Charlottesville has been critical. We simply would not have succeeded without her.”

As of April of this year, the Council has three roundtable groups in Charlottesville.

“My experience here with the Council has been pretty incredible,” said Arlene Lee about the award. “I just really, really want to thank you for what you’ve done for me. What I have done for you is peanuts. You inspire me to do more, learn more, and plant seeds everywhere. Thank you so much, all of you.”