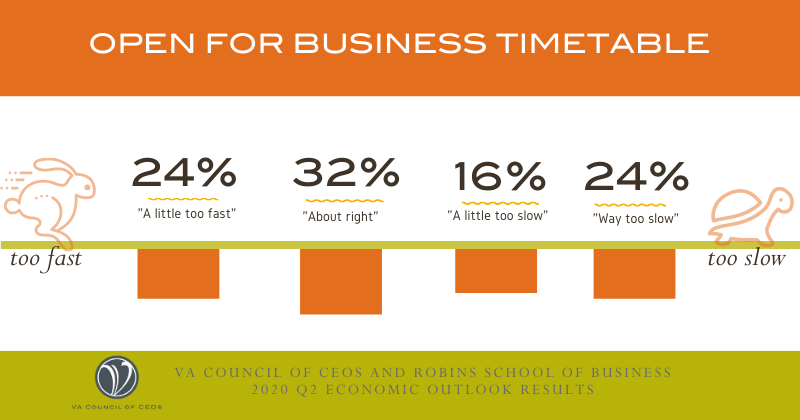 The third edition of this special survey found finds that expectations over the next six months for sales, capital spending, and employment all improved compared with expectations at the end of May.

“The dramatic rebound of this index, from minus 18 to plus 54, reflects the nature of these entrepreneurs. CEOs of small and mid-sized Virginia businesses have been resilient and creative in adapting to a tremendously difficult business environment,” says Scot McRoberts, executive director of the Virginia Council of CEOs. Adding, “We certainly are not out of the woods yet, but these data are a good sign.”

“Survey results over the past four months indicate a positive and steady increase in economic outlook.” said said Randy Raggio, Associate Dean at the Robins School of Business. Raggio administers the survey and collects the responses each quarter. He adds, “With the move to Phase 3 on July 1, companies will have more opportunity to participate in the recovery.”

“These positive results are very welcome news at a time when stress from the continuing uncertainty is taking a toll on employees and business owners,” said Mickey QuiÃ±ones, dean of the Robins School. Adding, “They show that the hard work and sacrifices being made by many are making a difference in the performance of Virginia businesses.”

This month found that executives’ expectations pertaining to sales, capital spending, and employment represent improvements in economic outlook over results from the end of May. 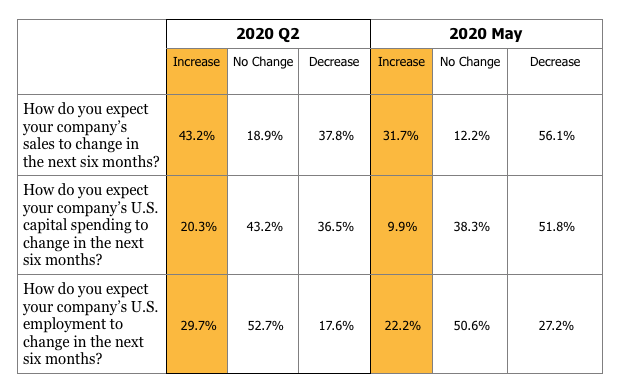 To summarize, CEOs predictions over the next six months at the end of June include:

The Robins School adapted the survey from the Business Roundtable, an association of CEOs of American companies that conducts a similar survey nationally. Randy Raggio, associate dean at the Robins School, administers the survey and collects the responses each quarter. The survey has been administered quarterly since 2010.

The Virginia Council of CEOs is a nonprofit association whose mission is to connect the CEOs of small and mid-sized businesses for learning and growth. The Council is led by a volunteer board of directors, advisory board and a small staff. Currently, there are more than 200 CEO members, mainly in Richmond and Charlottesville. Learn more at www.vaceos.org.