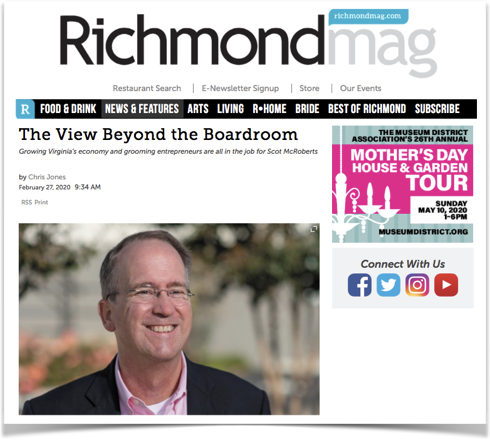 Virginia Council of CEOs Executive Director Scot McRoberts was recently featured in “The View Beyond the Boardroom: Growing Virginia’s economy and grooming entrepreneurs are all in the job for Scot McRoberts” — a Richmond Magazine article by Chris Jones.

In the post, McRoberts shares his views on Virginia’s economic stability, his role as a CEO connector, and the four identifiable traits that entrepreneurs should possess to develop and sustain their businesses.

Wrote Jones, “McRoberts sees entrepreneurs as visionaries, people who muster the grit and determination to do whatever it takes to see their plans through to fruition. They value the ideas they bring to the table that can solve problems in the world.”