The second quarter 2019 CEO Economic Outlook survey by the University of Richmond’s Robins School of Business and the Virginia Council of CEOs finds that Virginia CEOs’ expectations for sales, capital spending, and employment over the next six months fell compared to their expectations last quarter. Overall, expectations at the end of the second quarter were similar to those from Q1 and Q2 of 2018.

“Uncertainty around the effects of tariffs and continuing workforce challenges seem to be tempering small business CEOs’ confidence in the future,” said Scot McRoberts, executive director of the Virginia Council of CEOs. “That said, 70% of those surveyed expect growth in the next six months, so I would rate this as a positive outlook.”

“CEOs seem to expect a slowdown in the future, but see the current economy as relatively strong,” Randy Raggio, Associate Dean at the Robins School of Business. Raggio administers the survey and collects the responses each quarter. He adds, “The percentages of CEOs who expect decreases in sales, capital spending and hiring is nearly identical to last quarter. The real change is in those who expect to stay the course vs. grow.”

The following survey results from the first and second quarters of 2019 show projections for the next six months for sales, spending and employment: 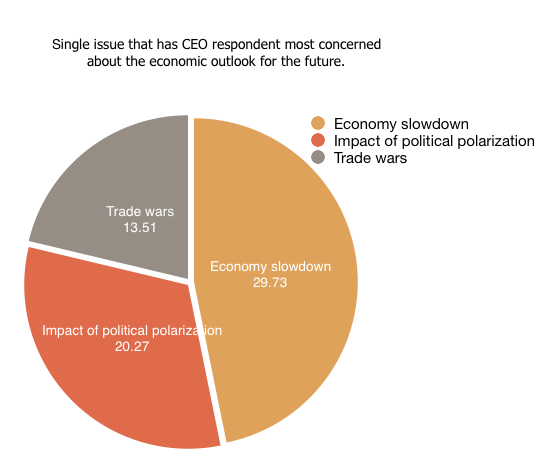 With the potential for increased tariffs on Chinese and Mexican imports, CEOs were asked how tariffs would impact their business.