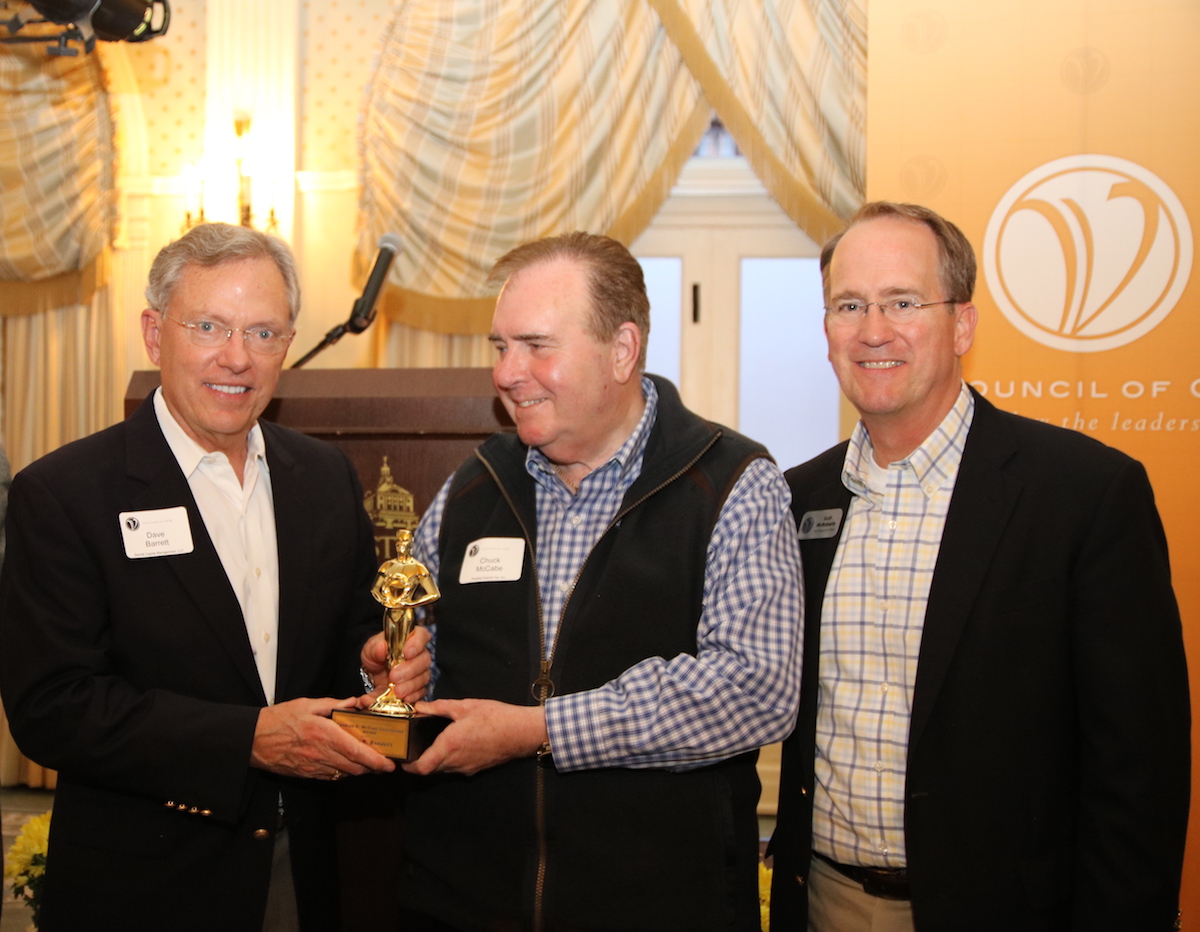 David Barrett has been an active member of the Council since 2002. He served as Board Chairman from 2004-2005, and today he continues to serve on the advisory board and various committees.

Chuck McCabe and Mark Creery — current VACEOs Chair and CEO of Data Directions, Inc. — presented the award to David Barrett. Creery recognized Barrett’s desire to bring high quality professional training to roundtable participants and leaders and his unwavering commitment to grow the Council as reasons for Barrett’s appointment. “In 2004, he became Membership Chairman and almost single-handedly recruited 46 new members, more than doubling the number of CEOs in the Council,” said Creery during the presentation ceremony.

Barrett is also credited for the creation of an annual member retreat each year.

“He wondered why we didn’t have an annual ‘Retreat’ and set out imagining and planning our first CEO Retreat at Kingsmill Resort. Today, we enjoy the 14th iteration of that great idea,” Creery explained during his presentation.

“David Barrett is indeed a very special member,” said Scot McRoberts, Executive Director, Virginia Council of CEOs. Adding, “I am always glad to see a call from him come in, as I know I am about to be swept up by positive energy, a new idea or two, and probably an introduction to a new member prospect.”

“The first company I owned and operated . . . I didn’t have the Virginia Council of CEOs, and it was tough. I wish I’d had it,” said Barrett during his acceptance speech. Adding, “For the second company I’ve owned, and I still own, [The Council] has been a wealth to my family and children and to my grandchildren. It’s been great. I love the people in this room and working with Scot McRoberts. I can’t tell you how much I appreciate this. Thank you!”

About the Virginia Council of CEOs
The Virginia Council of CEOs is a non-profit association that serves CEOs of small and mid-sized businesses in Virginia. The Council was founded in 2000 to connect CEOs so that they can learn and grow together. With 225 members in Central Virginia at this time, the Council is forming new CEO Roundtables in other parts of the state. Learn more at http://www.vaceos.org.