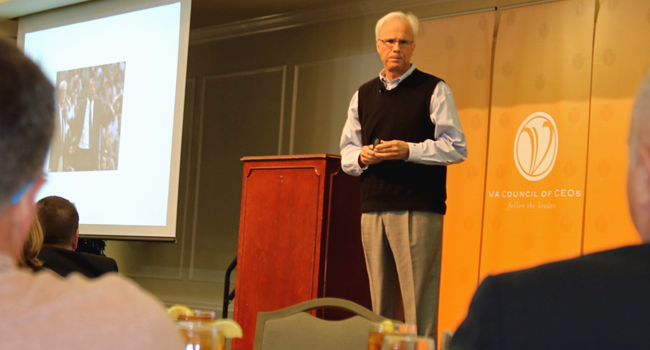 What can you learn about leadership from a 13-year NBA veteran and World Champion coach? Turns out, a lot.

Before we said goodbye to 2017, we said hello to former Boston Celtics and LA Clippers coach Kevin Eastman at our last Quarterly Luncheon of the year. Like our membership, Kevin has a thirst for knowledge – becoming very agitated if he can’t find an entry for his WILT (What I Learned Today) notebook each day.

If you were lucky enough to be at the luncheon, you heard stories about winning championships, managing personalities and, most importantly, what it takes to lead teams to greatness. Simply put, Kevin Eastman’s life is truly a lesson in leadership.

Here are just a few other nuggets he shared with us during his presentation. 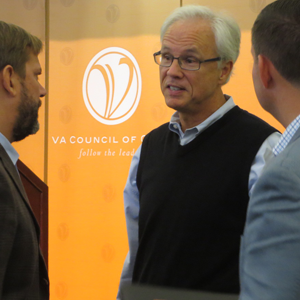 Do you have a thirst for knowledge that will help you grow your business? Or maybe you need inspiration to help you get “unstuck”? VACEOs can help you work ON your business – not just in it. Our members are regularly exposed to inspiring presentations by local and national thought leaders. Topics range from management techniques to trends in technology and marketing, and much more. Become a member today, or contact us about attending an event as a guest. 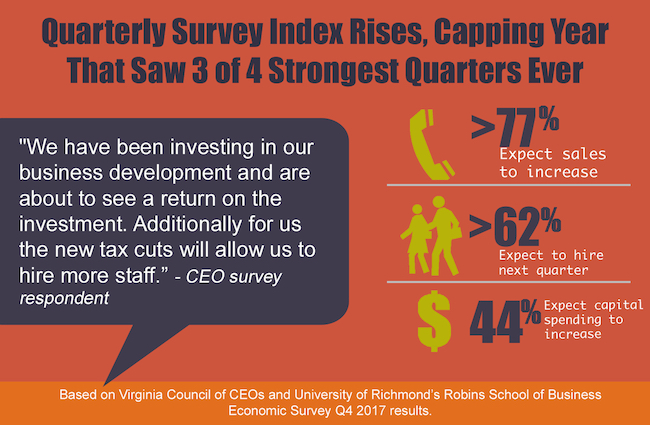 The Virginia Council of CEOs has experienced an unprecedented year in 2017. Three very important milestones were reached early in the year, including a membership count of 200, a record number of sponsors to come on board, and an alliance with the Virginia Chamber of Commerce.

The year is also marked by another important development: more new members came on board in 2017 compared to previous years, bringing the final membership count to 218 at press time (December 13).

The Council has grown tremendously this year, thanks in part by our expansion into the Charlottesville market and the extremely high member retention rate we have, which hovers around 90 percent each year,” says Scot McRoberts, Virginia Council of CEOs executive director. He adds, “Our Roundtables and Forums are humming, and we have an incredible lineup of events and programs planned for 2018. Everyone is excited about bringing more entrepreneurs from Charlottesville into the fold.”

We would like to officially welcome the Virginia Council of CEOs Class of 2017 to the organization.

Wishing You Health, Happiness and Prosperity

One of the real joys this holiday season is the opportunity to say thank you and wish you the very best for the new year.

For those of us at the Council, we couldn’t be more thankful and excited about what 2017 promises to bring. From a shiny new world headquarters to an exciting new state-wide partnership we will announce in January, we welcome the New Year with open arms and a joyous heart.

Wishing you and your family health, happiness and prosperity in 2017.

and everyone in the VACEOs family

In  December we will be in cool new space in the Handcraft Building in Scott’s Addition, with one brewery in the building, and two more within two blocks.

Until that space is ready, we are camping out in some very nice space in the Virginia Center area. If you need to find us, we are co-located with our friends The Fahrenheit Group at 1015 Technology Park Drive, Glen Allen, VA 23059. This was formerly Create Digital’s office, and still has some of their signage.