The 2018 VACEOs Retreat was rich in content and networking opportunities. Many of the CEOs in attendance chose to take a deep dive into the workshops. Others, like Henry Clifford, CEO of Livewire, desired to simply approach each presentation with an open mind.

“My goal during the Retreat is not to delve into the minutia of each presentation, but to open myself up to thinking differently,” said Clifford. “The more I embrace the broad, sweeping ideas and look at it from the macro perspective, the more likely I am to adopt things into my own world personally or professionally.” 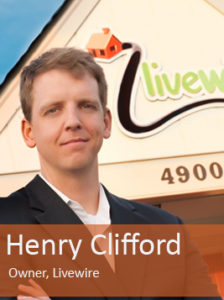 A self-proclaimed “Flow junkie,” Clifford was particularly drawn to what keynote speaker Steven Kotler, director of research for the Flow Genome Project, had to say about amplifying performance through achieving “Flow state.” “I appreciate his message about Flow as a five-time multiplier in productivity,” explained Clifford. “It read loud and clear for me. I feel like what he’s up to is transformative.”

Like Clifford, we felt challenged to look inward. We were also inspired by the real-world observations Kotler and Colleen Stanley presented to us. Here are a few of the sweeping ideas we were left with. What were your big takeaways? Leave a comment – we’d love to know!

TAKEAWAY #1: THE IMPOSSIBLE IS BECOMING POSSIBLE.

Steven Kotler is a New York Times bestselling author, an award-winning journalist and the co-founder and director of research for the Flow Genome Project. He shared stories about technology advances that are happening right now, where autonomous drone taxis are a reality, artificially trained AI psychologists are helping veterans, and a new wave of 3D printers is turning multiple industries upside-down – producing human organs, bionic arms, apartment complexes and bridges. AI is being used today to diagnose cancer, create movies and novels, and, in Tokyo, offer up a likable candidate for mayor.

Crowdsourcing is adding fuel to the exponentially accelerating state of technology.

“The biggest story here is probably crowdsourcing,” said Kotler. “It’s a fancy way of saying ‘I’m going to leverage the ideas or the assets of the crowd.’” For companies that are known to innovate in house, crowd creativity is the only way they can keep up. Kotler says Google, Apple and Microsoft are crowdsourcing AI development, and Proctor and Gamble crowdsources 50 percent of its product line.

TAKEAWAY #2: THE UNICORN CLUB IS GETTING CROWDED.

Today, the savvy entrepreneur (aka, your new competition) is leveraging technology like 3D printing, using crowdsourcing AND crowd-funding or ICOs to obtain the funds and creative edge they need to grow to scale at an ALARMINGLY FAST rate.

“This is an increasingly crowded Unicorn Club,” said Kotler. “How fast does it take a company to get to a billion-dollar valuation? It used to take 20 years. Now it’s done in four months.”

The impossible truly is becoming possible – and your competition is now everywhere.

But according to Kotler, to completely maximize your potential, taking advantage of technology as a strategy isn’t enough. You must also harness a particular state of consciousness.

“The human brain is not built to perform at the speed or scale of today’s world,” said Kotler. “That’s why we need to upgrade our mental hardware.” According to Kotler, we need to enter a “Flow state,” described as being “in the zone” by some. 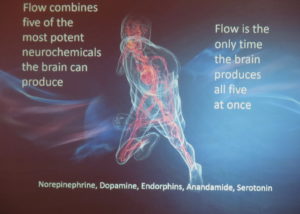 It’s when you’re so focused on the task at hand that everything else disappears. Your sense of self starts to disappear. Time goes by. Occasionally, it slows down, but more frequently, it speeds up: Five hours feels like five minutes. It’s a state that has been scientifically proven to be the only time when all five “pleasure drugs” produced by the body are released, and thus all aspects of performance – mental and physical – go through the roof, impacting motivation, learning and creativity.

“Flow is as close to near-perfect, high-speed decision-making as you can possibly get,” explained Kotler. He shared with us that one study found top executives in Flow state are five times more productive than usual. So, for example, if you spend two days a week in Flow, you’re 1,000 percent more productive than the competition – and then you’ve got more time to pay attention to emotional triggers that can affect internal relationships and sales. Read more about Flow.

TAKEAWAY #3: RECOGNIZING EMOTIONAL TRIGGERS AND UNLOCKING THE POWER OF EMPATHY IS KEY.

We were honored to hear from Colleen Stanley, president and founder of SalesLeadership, Inc., on the last day of the Retreat. A powerhouse of a speaker, she helped us understand how to respond to emotional triggers – and how certain soft skills, like empathy, can help in the consistent execution of hard selling skills.

“How do we think we can influence another human being if we don’t think, or care about, how they’re thinking or feeling?” she asked.

When you demonstrate real-world empathy, you make an emotional connection with another human being. It elevates the conversation, the conversation changes, and so does the relationship.

TAKEAWAY #4: BE BETTER AT PAYING ATTENTION.

Can you say you’re really in tune with the emotions of your employees or prospects? Both keynotes addressed the power of mediation and self-reflection. The biggest takeaway? We need to get better at paying attention.

“The number-one way to grow your self-awareness is to carve out precious downtime,” said Stanley. “Only in the self can you gain clarity of thought and of purpose – time to reflect and ask, ‘What trigger showed up today that made me act in a manner I regret? Am I the trigger?’ In the quiet, you can tune into your own emotions.”

“Once you know thy self, you can know others better,” Stanley added. “Pay attention. It just might be the number-one skill to teach your team, leaders or salespeople.”

NOW THAT THE RETREAT IS OVER…

Now that the Retreat is over, we wonder: Will you make time to become more self-aware? Will you apply some of the principles of Flow and become more adept at decision-making? Or, will you miss the shifts occurring around you, like your prospect’s subtle change in emotional state, or the big shift in technology that will dramatically affect your business?